Because dentists had no alternative as to where to send their broken instruments other than back to the manufacturers, who make them pay dearly for the service not to mention an impossible turn-around time frame, several handpiece repair facilities opened their doors.

Al's background in the dental supply industry dates back to 1964 when he started his dental career with a St. Louis, MO dental supply company. Two years later Al moved on to a handpiece company called "Densco" where he became national sales manager. His next move after 9 years was into his own business as an independent representative where he started, as co-owner, Tiger Manufacturing Company. He later sold his half to his partner and continued representing equipment companies including Dental EZ / Star Dental.

Al's son Steve has become one of the most proficient handpiece repair specialists in the industry. He has attended numerous advanced specialty training courses and has the industry reputation of "if Steve Pollock can't fix it, it simply cannot be fixed"

Shamrock Dental Company, Inc. along with their base of employees, who have all spent no less than 7 years with the company has grown to become the largest handpiece repair facility in the Southeast U.S.

The company started franchising and adding company stores in 1995. This company was Diversified Dental Services, Inc. (DDS). 67 facilities later and with the re-organizing of territories to enhance the profit of owners (re: expanding their areas), the company changed its DDS name to Shamrock Dental Franchises to coincide with the original St. Petersburg repair facility. Shamrock Dental is the first choice of those entrepreneurs willing to achieve a better lifestyle in a recession proof healthcare business of their own.

We give you the highest quality repair by using the most qualified techs in the business and the best replacement parts available. Our 40 years of experience really shows.

In 1994 the Center for Disease Control (CDC) mandated that dentists autoclave (sterilize by steam or chemical) their high speed handpieces and accessories. These handpieces are used to run the burs or drills in addition to the tooth polishing cups and brushes used in cleaning procedures. This sterilization procedure makes them highly susceptible to breakdowns due to the corrosive nature of the repeated heat procedure. 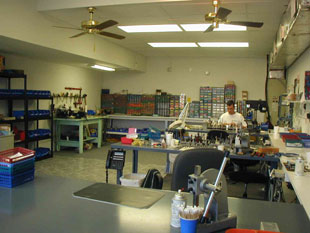